Small Builds Big. How Ecuador and Uruguay contributed to the construction of UNASUR 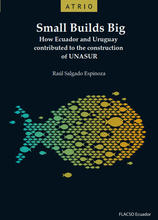 This book introduces an innovative model for studying the role of small states in building international organizations. The model categorizes these states into region-engaging, region-constraining, and region-adapting actors, depending on their particular type of involvement in regional politics. Ecuador and Uruguay are studied in depth and categorized as region-engaging small states in the context of building UNASUR, the South American Union of Nations. The book argues that these two nations show elements of a shared and collective identity that influence their region-engaging character.

The author considers various factors such as governments driven by left-oriented ideology, the failure of economic integration projects, the overpowering influence of external agents, and the need for national and regional peace. These circumstances as well as the prospect of small states playing a leading role and ushering in a new type of political cooperation within UNASUR prompted Ecuador and Uruguay to support the building and consolidation of this alliance.
Índice de contenidos

Chapter 3
Small States in the Construction of the South American Union of Nations (UNASUR): A Case Study of Ecuador
Introduction
The Sick State and Disappointment with the Economic Mechanisms of Integration: Historical Background
Overlapping Factors between the Ecuadorian Nation-state and the Idea of UNASUR: The Prospect of a New Kind of Cooperation
The Prospect of Communitarian Cooperation and the Creation of First Councils within UNASUR
Conclusion

Chapter 4
Small States in the Construction of the South American Union of Nations (UNASUR): A Case Study Uruguay
Introduction
Uruguay in Transformation and its Dissatisfaction with the Mechanisms of Economic Integration: Historical Background
Overlapping Factors Between Uruguay’s Identity and the Idea of a South American Identity
The Prospect of Communitarian Cooperation and the Creation of First Councils within UNASUR
Conclusion

Chapter 5
Are Ecuador and Uruguay Region-engaging Small States in UNASUR?
Introduction
National Political Situation of Small States and Interaction between States
Political Cooperation as a Result of the Failure of Economic Integration
Elements of Identity as Explanatory Factors for Ecuador’s and Uruguay’s Participation in the Creation and Consolidation of UNASUR
Role Enactment, Influence, and Cooperation of Ecuador and Uruguay within UNASUR
Conclusion

Conclusions
Introduction
Reasons for Ecuadorian and Uruguayan Engagement in UNASUR: More than Shared Elements of a Collective Identity?
Reflections on the Theoretical Approach and Methodology
Final remarks